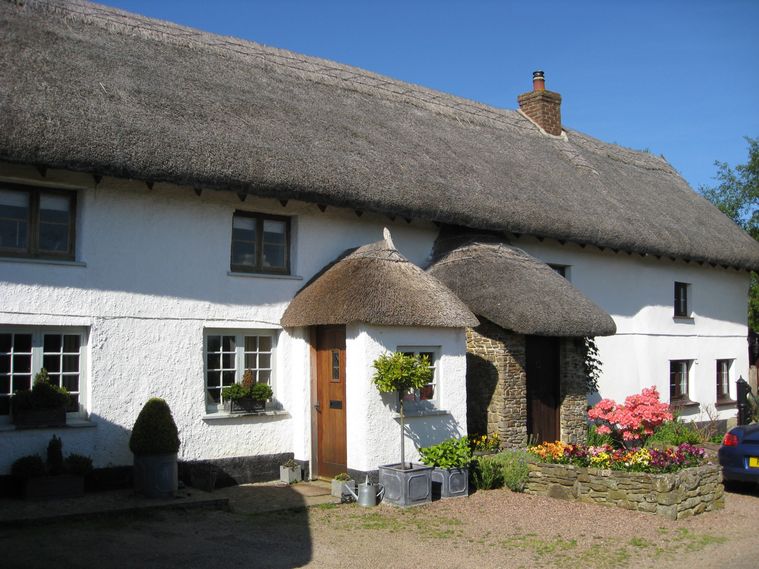 The cob-and thatch house has not been listed and so there is no English Heritage description of it. But it is clearly an old structure, probably dating back to the 15th or 16th century. There is an unusually high granite base on the front of the eastern side. It is now two cottages (with added porches and side extensions), but the partition wall between the two is thin and is not on a straight vertical alignment, so it seems probable that it was originally a single dwelling, perhaps that of a smallholder, or of a tradesman who also ran a tiny smallholding. Over the years it seems to have changed several times between being one residence and two.

The earliest reference to Cramphay so far traced is in a deed of 1760, which indicates that there were at that time two separate holdings, one called “Clampys” and one called “Joint’s Tenement”, presumably because it was or had been occupied by somebody called Joint (the Devon Muster rolls record a John Joynt in Spreyton as early as 1569). Later documents make clear that Joint’s tenement included a plot of land consisting of five fields totalling 17½ acres immediately behind Cramphay. The fields were unimaginatively named Dairy Close, Moor, Middle Field and Yonder Field, with an unnamed 2 acres of pasture by the house. The name of the first field indicates that whoever lived there kept cows – and evidence of a small shippon has been found.

Whether the original Mr Joint occupied the whole or only half of the current building is not clear. It is just possible (although it seems unlikely) that he lived in another house which subsequently fell into disrepair and eventually disappeared, leaving only what is now Cramphay. At any rate, by the 19th century, the current building was divided into two cottages, with the one nearest the village being called Cramphay and the further one (with the smallholding) Joint’s Tenement – although, as can be seen from the census returns, both parts of the building were called at times both Cramphay and Joint’s Tenement, so the situation is somewhat confused.

Both Cramphay and Joint’s Tenement were part of the Manor of Spreyton that belonged to the Talbots in the Middle Age and then passed to the Kellys of Kelly in West Devon. Through marriages and inheritances, ownership of the manor and the properties like Cramphay that went with it subsequently became split between three landowning families, so that by the 18th century, the Kellys only retained a quarter share. The Battishills of Spreyton Barton owned a half; and the final quarter was in the hands of a family called Risdon.

Nathaniel Risdon, the last of the Spreyton branch of the Risdon family, died without male heirs and his property, including his quarter share of Cramphay and Joint’s Tenement, went first to his mother and then to his cousin the Rev. Richard Hole, who was a rich cleric and landowner from North Tawton.In 1760, Hole granted John Langmead, blacksmith, a 2,000 year lease, i.e. tantamount to a freehold interest, of his quarter share of Cramphay and Joint’s Tenement. Under the terms of the lease, Langmead (and any subsequent owners of the leasehold) had to pay an annual rent of £1.10s. to Richard Hole and his heirs in perpetuity. In 1800, Richard Hole sold the “reversion” (i.e. the right to the property at the end of the lease) and the right to the annual rent to John Lambert Gorwyn of Cheriton Bishop who immediately sold them on to his cousin George Cann of Falkedon.

In the meantime, the Battishill family appear to have acquired Langmead’s leasehold interest in Cramphay, as in 1806 William Battishill of Week bequeathed a quarter share of a 1,000-year (possibly a mistake for 2,000-year) lease of Cramphay and Joints Tenement to his son William. By the time of the tithe apportionment in 1842, William Harrington Battishill of Spreyton Barton was registered as the sole owner of Cramphay and Joints Tenement.So it seems that the Battishills managed over the years to acquire the whole of the property.

When George Cann died in 1804, he left the right to the annual rent from Cramphay to his nephew George Lambert Gorwyn, who in turn left to his grandson, another George Lambert Gorwyn, in 1837. By this time, landowners were increasingly ignoring these tiny “reserved” rents based on the traditions of feudal times, and the Battishills appear to have stopped paying the rent sometime during the life of George Lambert Gorwyn senior. For a long time George Lambert Gorwyn junior (who was a minor when he inherited) was unaware that he had any right to such a rent. But in the early 1850s one of his trustees alerted him to it. George junior was an unpleasant and vindictive man who was always quarrelling with the Battishills, and he immediately asked William Harrington Battishill, as the then owner of the leasehold, to pay arrears of rent. Battishill seems to have refused, as there is a document in the Devon Record Office that shows that George Lambert Gorwyn sought Counsel’s opinion on how to recover the rent due to him (whether the rent arrears outweighed the legal costs is an open question, but George never liked to let go). George appears to have won his case, as in 1872 he was still collecting his £1.10s.annual rent from Cramphay.

George Lambert Gorwyn died in 1885 and left all his property to his only son, George Lambert of Coffins (the family had by then dropped the Gorwyn), who subsequently became a well-known Devon politician and was created Viscount Lambert in 1945. Cramphay and Joint’s tenement formed an enclave in his estate, as they lay between his farms of Coffins and Spreytonwood. In 1908, he bought a couple of fields on the other side of the road from Cramphay belonging to a member of the Cann family (known as Cramphay Field and Pinks Field, totalling some 7 acres). Either in 1913, when the Battishill estate in Spreyton was auctioned following the death of W. H. Battishill, or a little while thereafter, George Lambert completed the consolidation of his estate by purchasing both Cramphay and Joint’s Tenement and the fields that went with Joint’s. From that time on, the fields belonging to Joint’s Tenement were incorporated into Coffins farm. The Lambert family finally sold Cramphay and the rest of their estate in Spreyton in 1972.

For the early owners of Cramphay and Joint’s Tenement, the properties represented rental income and would always have been let. Presumably there was a bailiff or agent who coordinated the leasing arrangements between the various part-owners, so that the tenants did not have to deal separately with each. Information about early tenants is inevitably patchy. But the documents reveal the following occupants.

oThomas Honeychurch, 20-year old tailor, with wife Mary and baby daughter, and his apprentice William Jackman, age 15. The Honeychurch family was to remain at Cramphay for more than 60 years. At this point, they appear to have been living in the Joint’s Tenement side.

Fred Honeychurch (who was paying rent of £7 a year in 1913) remained at Cramphay until his death in 1916. His half of Cramphay was later used by George Lambert MP to house one of his farmworkers.

Fields belonging to Cramphay/Joints Tenement in 1842 (the last five were listed as pasture in 1913).

DOCUMENTS IN THE DEVON RECORD OFFICE RELATING TO CRAMPHAY

Counsel’s Opinion of 2.2.1853 on George Lambert Gorwyn’s right to recover arrears reserved rent due by WH Battishill of Barton on Cramphay and Joints Tenement, together with a covering solicitor’s letter (Counsel is JK Kingdom of Temple). It appears that GLG had been unaware that he was owed this rent until alerted by one of his trustees. Also mentions:

Indenture of 24.6.1760 whereby the Rev Richard Hole demised ¼ of Joints Tenement and Cramphay to John Langmead for 2000 years, with an annualreserved rent to Richard Hole of£1.10s.

Indentures of lease and release dated about 28 and 29.9.1800 between (1) Juliana Hole (widow of Richard) and her son Robert Hole and (2) John Lambert Gorwyn conveying to John Lambert Gorwyn the reversion, fee simple and inheritance of the property, with the annual rent becoming payable to him;

Indentures of lease and release of 14 and 15.10.1800 whereby JLG conveyed to George Cann, among other hereditaments, the relevant property (which Geo Cann then left to his nephew GLG, grandfather of the present GLG, who in turn left the property to GLG).

Notice dated 7.2.1853 served onWilliam Harrington Battishill of Spreyton, yeoman, by George Lambert Gorwyn for arrears of reservedrent for one quarter of Joints Tenement and Cramphay.Annotated on the back by Samuel Powlesland junior and Joseph Knapman, to say that the document is a duplicate of the notice served that day on WHB.

Correspondence of 1908 about the purchase by George Lambert from George Dunning Cann (a solicitor in Exeter who was William Harrington Battishill’s heir) of three fields adjoining Spreyton Wood on the other side of the road from Cramphay (called Cramphay Field and Pinks Field – this last had previously been two fields).The tenant is described as James Sanders paying £12 per annum. Three fields totalling 7 ½ acres, of which 2 had been down to grass for some years and were treated as permanent pasture. Sold by public auction with the great tithe belonging to the property on 25.6.1908 to George Lambert M.P.

Copy of note of 21.7.1913 from George Lambert M.P. to W. Isaac, The Barton, Spreyton, about an alteration to the hedge by the side of the garden at Coffins on the Cramphay field bordering Bewdown, taking about ¼ acre of Isaac’s land, and Isaac’s reply agreeing (Isaac was renting the Joint’s Tenement fields from the Battishills).

1913 correspondence between W Isaac of the Barton, Spreyton and George Lambert about GL making a small enclosure in the Cramphay field.

6.5.1916 Land Tax Redemption certificate in respect of Cramphay, described as a house and land, owned by George Lambert MP and in the occupation of (i.e. rented by) Mr F. Honeychurch and Mr Isaac. A map is attached showing the land (5 fields between Cramphay and Bewdown, up to Coffins back lane, and including Cramphay itself – ie both Cramphay and Joints Tenement).