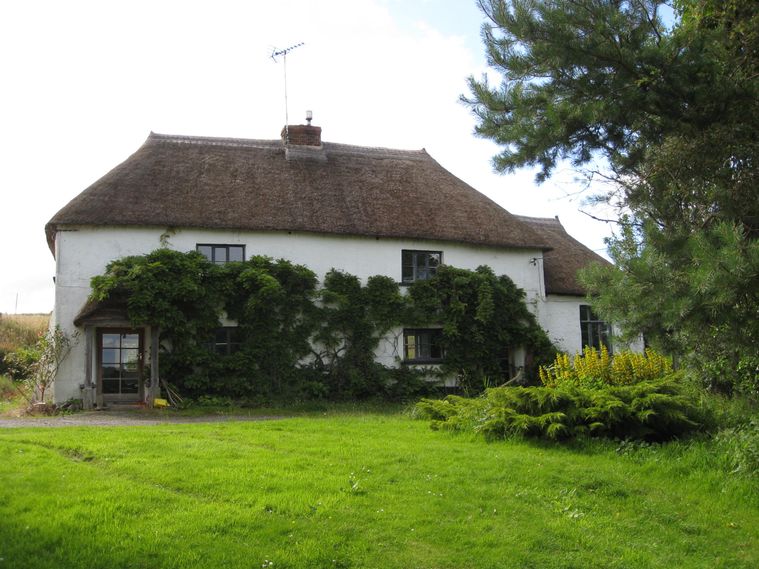 Huddishill or Lower Huddishill (also spelt “Huttifield” in the Ordnance Survey map of 1809 by William Mudge) is on the border of Spreyton and Bow. There was another dwelling a few hundred yards up the road, within the parish of Bow or Nymet Tracey, called Higher Huddishill. This has now disappeared. It probably fell into disrepair and was demolished in the mid-20th century (it still appears on the 1905 Ordnance Survey map).

There is some mystery over the name. The terms Higher and Lower Huddishill do not appear to have been used until the 20th century. In all the 18th and 19th century documents mentioning Lower Huddishill it is simply “Huddishill”, and it was always treated as part of Spreyton. Higher Huddishill, on the other hand was treated as part of Nyment Tracey (Bow), and appears in the 19th century census returns as “Huddick’s Hill”. It may have been the tidy-minded mappers of the Ordnance Survey, when they prepared the first detailed map of the area around 1890, who decided to rationalise things by baptising the two smallholdings Higher and Lower Huddishill.

Huddishill does not figure in Place-Names of Devon, but judging by other place-names in Devon, “Huddis” or “Huddick” may be derived from the personal name of its original owner, possibly a Saxon; alternatively, it could be a corruption of “white”.

According to Historic England, which has given the farmhouse a Grade II listing, Lower Huddishill was probably built in the 18th century as two cottages. Originally, however, Huddishill was probably a smallholding with a dwelling and some small farm buildings. The cottages would therefore have replaced an earlier tiny farmhouse which was in disrepair. Perhaps the property had been acquired by the occupant of a neighbouring farm, probably West Hillerton, who needed cottages for his farm labourers and so rebuilt the house as two cottages.The cottages each had a single downstairs room with inglenook fireplace for cooking and heating (the fireplaces were back to back in the centre of the building). 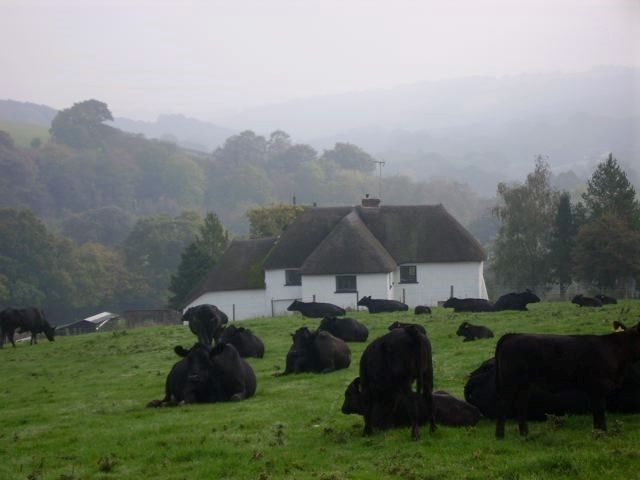 The Historic England description of Huddishill is as follows:

It is not clear when the two cottages were converted to a single dwelling. The tithe apportionment survey of 1842 refers to “houses” at Huddishill, but the census returns from 1841 onwards show only a single family living there.

1758:the present Huddishill was almost certainly part of the Manor of Spreyton which in medieval times belonged to first the Talbot and then the Kelly family. Ownership of the manor became split, probably because it was divided between several heirs. By the 17th century a half-share was owned by one family and the remaining two quarter-shares by two other families. The first reference to Huddishill so far traced is in a deed of 1758 (or possibly 1751) whereby the Reverend Richard Hole, a rich cleric from North Tawton, who owned one of the quarter-shares of the Manor, gave Mark Cann of Spreyton a 2000-year lease (i.e. effectively a freehold) of his quarter of North Beer and Huddishill and other Spreyton properties.Mark Cann or his successors probably acquired the remaining shares of the freehold of Huddishill from the other part-owners of Spreyton Manor.

The Canns were one of the principal landowning families in Spreyton and for them Huddishill would have been either a source of rent or a convenient residence for their farmworkers. The Canns seem also to have owned West Hillerton. So it may well have been Mark Cann who had the current building erected to house his labourers working on that farm (the 19th century census returns show Huddishill as occupied throughout by farm labourers). He probably farmed the land attached to the holding (about 7 acres in 1842) as part of either North Beer or West Hillerdon, although some might have been left for use of the occupants of the cottages to grow potatoes etc.

1775:Mark died in about 1775. His will refers to “the testator’s estate of Huddishill”, and it appears to have been part of the residue of his estate that went to his son, another Mark Cann.

1832: Mark Cann junior appears to have died childless, as the property is next recorded in the ownership of his brother George Cann of Bush (1744-1832). George owned a number of farms in Spreyton and Bow, and when he died in 1832 he bequeathed North Beer, Huddishill and West Hillerdon in Bow to his great-nephew William Croote Cann. The latter is also recorded as the owner in the 1842 tythe apportionment survey.

1854: When William Croote Cann died in 1854, he in turn bequeathed North Beer, Hillerton and Huddishill to his son George Cann. The latter did not stick at farming for long; by 1871 he had set up as a merchant in Crediton selling guano, oil, coke and coal. His relation John Heathman took over North Beer and probably also Huddishill, which seems to have been treated very much as an appendage of North Beer.

INHABITANTS OF HUDDISHILL ACCORDING TO THE CENSUS

Conveyance of 29.9.1800 whereby Juliana Hole of Exeter, widow, and Robert Hole of Trinity College Cambridge, Clerk, convey a number of properties to John Lambert Gorwyn of Cheriton Bishop, Gentleman. The deed mentions an indenture of 30.10.1758 whereby Richard Hole, by the then description of Richard Hole of North Tawton, Clerk; granted a 2000-year lease to Mark Cann of Spreyton, Gentleman, of inter alia Richard Hole’s fourth part ofHuddishill in Spreyton, then in the possession of George Howard. The deed conveys the freehold of Huddishill to John Lambert Gorwyn, together with the freehold of a number of other minor properties let on similar 2,000 leases. A tiny “reserved rent” is payable by the tenants of these properties to the freeholder.

Conveyance of 15.10.1800 whereby John Lambert Gorwyn conveys some of the properties from the earlier deed, including the freehold of Huddishill, to George Cann of Falkedon.

The will makes numerous bequests, including one to William Croote Cann, son of his deceased nephew John Cann, of his Manor or reputed Manor, capital messuage, Barton and farm of West Hillerdon in Nymet Tracy (Bow), together with Huddishill and its landtax and Rectorial tythe revenues; and North Beer. His inheritance of the latter is dependant on his paying £400 to the testator’s executor and £150 to Mark Cann, son of the testator’s brother Thomas. William and his heirs are also directed to pay certain quitrents or other yearly rents due out of North Beer, Bush,Cott, Huddishill and other lands in Spreyton, amounting to £9.2s.6d.testator under the will

Among the bequests in the will is one to his son George of West Hillerdon in Bow and Huddishill in Spreyton.