Rugroad may have been named after a Saxon owner called Hrugca, “Hrugca” becoming Rug-. The second element -rode probably came from a Germanic word meaning “clearing”, so it was “Hruga’s clearing”, and obviously very ancient in origin. It has also been spelt Ruggerode (in 1491);Rugrode (1765); Rugrow (1772); Rugg Rode (1543); Rug Rode; Rough Road; and Rugged Road – the last two no doubt on the assumption that the name had something to do with a road.

The property seems to have been associated closely with the neighbouring farm of Croft. A 19th century document refers to “Croft or Rugroad tenement”, as in an 1802 conveyance of the right to certain Spreyton tithes they are bracketed together as “Cruft or Croff’s Heath and Rugroad”.

A curious old manorial rent was payable out of the two properties to the lord of Spreyton manor, namely one pair of gloves annually. This undoubtedly dates back to medieval times. When Spreyton Manor became split between three owners (one had a half share and the other two each had a quarter share), the landlord with the half share became due one glove and the other two half a glove. In practice the rent was commuted into money. Thus, a 19th century document refers to an annual payment of one glove or 1s 6d being due out of“Croft or Rugroad tenement” to the Battishill family of Spreyton Barton, who had by then acquired a half-share of the Manor of Spreyton. So a pair of gloves seems to have equated to 3 shillings.

1543: Rugroad was part of the Manor of Spreyton, but appears to have been sold off by the manor fairly early on, as an enrolled deed records that in 1543 Sir John Fulford of Great Fulford in Dunsford was the owner. On 10 February of that year, Fulford conveyed to Richard Martyn of Spreyton “all his messuages, lands etc called Rugg Rode als Rug Rode”.

1765: by the 18th century, Croft seems to have fallen into the hands of the Kellys, lords of part of the manor of Spreyton, as in 1765 Arthur Kelly sold Rugroad to William Cann of Fuidge, although still subject to the requirement to pay the manorial due every year of a glove. Rugroad was a small farm and the Canns probably always rented it out. In 1751, for instance, a William Spear is recorded in the parish records as taking an apprentice for “Rugged Road”; and the tenant in 1765 was one Henry Shilston.

1801: William Cann died, leaving Rugroad to his brother George Cann, who lived at nearby at Falkedon. George died only three years later, leaving his estate to his sister’s son George Lambert Gorwyn (1763-1837). George Lambert Gorwyn, like his uncle, lived at Falkedon and appears to have taken the land at Rugroad in hand, farming it together with Falkedon and probably that of Croft which he also owned.

1840s:George Lambert Gorwyn junior let Rugroad along with Coffins to a Mr Hooper, who was still there in 1864. By the 1880s, however, he seems to have taken Rugroad back in hand himself.

1885: the farm was inherited by George’s son, George Lambert (1866-1958; he became an MP in 1891 and 1st Viscount Lambert in 1945). The Lambert family were by then firmly based at Coffins and Rugroad continued to be rented out, usually together with one of the neighbouring farms or the fields split between them.

1929: the tenancy of the farm was taken over by the Brimacombe family who remained there until about the 1950s, when they moved to North Beer.

1950s: the Sampson family, who had given just up the larger farm of Falkedon, took on the tenancy. But the remaining members of the family were by then old and the farmland was taken in hand again by the Lambert family. After the departure of the Sampsons, the old cob and thatch farmhouse was allowed to decay and was pulled down.

1972: Rugroad was sold with the rest of the Lambert estates after the death of the 2nd Viscount Lambert’s only son and heir to the estate in a car accident. At that time the farm consisted of some 60 acres. The land runs in a rough rectangle east of the Spreyton-Falkedon Road. 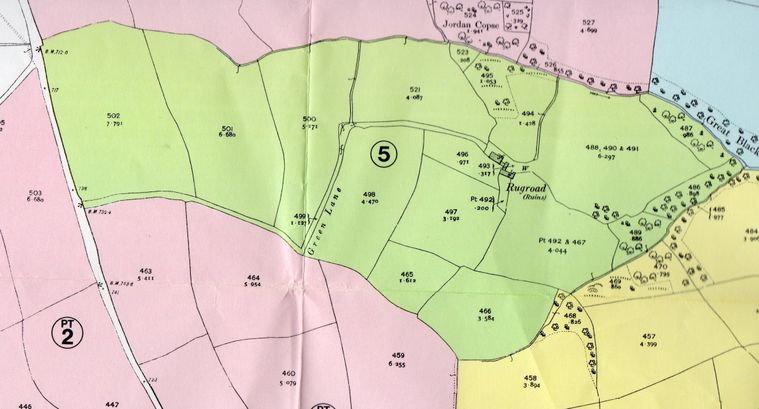 Map of Rugroad from 1970 sale document

FIELDS BELONGING TO RUGROAD IN 1972, WITH THEIR NAMES AT THE TIME OF THE 1842 TITHE APPORTIONMENT

There have been a number of (mostly minor) changes to the field boundaries and acreages since the 1842 survey, and some of the names could therefore have changed.

DOCUMENTS RELATING TO RUGROAD IN THE DEVON RECORD OFFICE

Lease and release of 20/21.5.1765 (5 Geo III) whereby Arthur Kelly Esq. of Kelly conveys to William Cann of Spreyton, yeoman, the tenement of Rugrode in Spreyton now in the tenure of Henry Shilston as under-tenant to Arthur Kelly at a rent of £12.12s. Arthur Kelly covenants that it is free of any encumbrances through acts of him or his father Arthur Kelly Esq., except for a 21-year lease granted by AK deceased to Henry Shilston of which about four years are expired.

Lease of 7.10.1911 granted by George Lambert MP to Samuel Lang. The property is described as ‘Rugroad, part of Spreytonwood’. The lease is for 7 years from 25.3.1912 at £60 a year. A memorandum records that the landlord is allowing £30 to the tenant in compensation for the state of the land and for repairs.