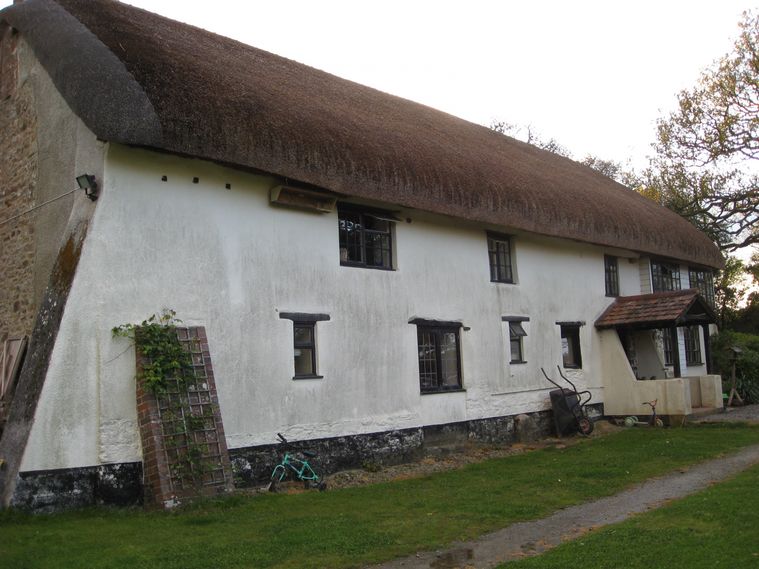 The Place-Names of Devon does not include a derivation for Stockhay in Spreyton, but there is another Stockey in Meeth that it suggests means an enclosure (Old English gehaeg which became hay) made out of trunks or stumps (Old English stocc), and it seems likely that the same derivation applies here, and that the name dates from before 1300.

At the time of the tithe apportionment survey in 1842/3, Stockhay was listed as having some 44 acres (see map and list of fields below), of which between a quarter and a third was orchard, woodland or rough pasture (“moor”). It seems likely that it is an old farm or smallholding, probably just enough to keep a family. Its land started just south of Week firs and extended along the road to Spreyton almost as far as Thornpark.

Stockhay was part of the Manor of Spreyton, in which there were several such smallholdings paying rent to the lord of the manor. Sometime in the 1400 or 1500s, the Talbot family who had owned the manor in the Middle Ages ran out of heirs. Probably because of complicated inheritance arrangements, ownership of the manor was split between three people in the proportions one half/one quarter/one quarter. The smallholder at Stockey would therefore have had three landlords, although no doubt with a single bailiff collecting the rent on behalf of all three.

The first mention of Stockhay so far traced in the records is in a deed of 1756 (see list of deeds below). By that time, one quarter of the manor of Spreyton belonged to the Risdon family, another quarter was in the hands of Arthur Kelly of Kelly (whose ancestor had married a Talbot heiress), and the remaining half had been acquired by a branch of the Battishill family from South Tawton, who had moved to Spreyton Barton and were steadily building up their landholdings in Spreyton. The Battishills gradually acquired the other two quarters of Stockhay. Information in the deeds gives the following chronology (the eldest son of the Battishills was traditionally called William and the various William Battishills mentioned below are of different generations):

The present house at Stockhay was originally a miniature Devon long-house, with a big kitchen/living-room and a scullery/dairy at one end, a cross-passage, and then space for the animals, including a linhay, on the other side of the cross-passage. It is built of cob and thatch with some stone. The photograph below shows Stockhay at the beginning of the 1970s, before the open front of the linhay with its wooden shutters and doors was closed in. There were probably two bedrooms above the living-room. Experts say that the distinctive scroll cut into the fireplace lintel dates the house as 1640s. It would appear that the whole house (living quarters and barn) was built pretty much at the same time - indicated by wooden frame and particularly the cruck joints. It may well have been put up by the Battishills when they took over the property. It may have replaced an earlier dilapidated building, possibly dating back to medieval times, as most of these small farms are very old. 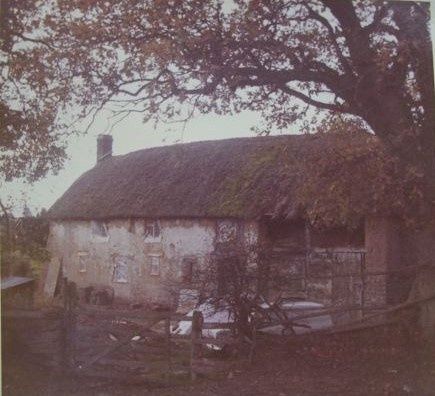 Stockhay in the 1970s. The old linhay on the right has now

been converted into living accommodation.

Stockhay was given a Grade II listing in 1988. The Historic England description is as follows:

Plan and development: 4-room plan cottage facing north-east. The original 17th century farmhouse however only occupied the left (south-eastern) 2 rooms. The end room was the main room (it still is) and has a gable-end stack with the original winder stair alongside. The small second room (now a study) was originally a dairy/pantry. The right end 2 rooms have been converted from agricultural buildings. The smaller inner room (now the kitchen and entrance hall) was formerly a pigsty and the larger right end room (now studio) was a 2-bay linhay. It is 2 storeys throughout.

Exterior: irregular 5-window front of 20th century casements with glazing bars. The right end pair of first floor windows are in a weather-boarded 20th century oriel projection in front of the former linhay tallet/hayloft. The present front doorway is right of centre and contains a 20th century door behind a contemporary gabled porch. Immediately to left is the former pigsty feeding hatch which has an internal shutter. In fact it is oak-framed and 2 sides reuse moulded pieces of 17th century origin. The original doorway (now blocked by a window) was into the left end room. Roof is gable-ended to left and hipped to right where it continues down over a woodshed outshot. To rear the old farmhouse section includes a possibly original oak-mullioned 3-light window containing rectangular panes of old leaded glass.

Interior: the original farmhouse is well-preserved. The main room has a roughly-chamfered cross beam and the rubble fireplace has a soffit-chamfered and scroll-stopped oak lintel and contains an oven relined in the 19th century. Original oak stair and roof of A-frame trusses with pegged lap-jointed collars. The 19th century linhay was originally open-fronted but now its structure shows on the inside. The crossbeam is tenoned into a full height oak post and supports the front end of a 19th century king post truss.

An interesting survival of a small 17th century house and it is well-preserved.

1881: Priscilla Osborn (midwife aged 59) plus her two sons, both wheelwrights; a 6-year-old grandson; a journeyman wheelwright, William Westlake aged 21, presumably working with her sons; and a boarder, 55-year-old James Webber, an agricultural labourer. 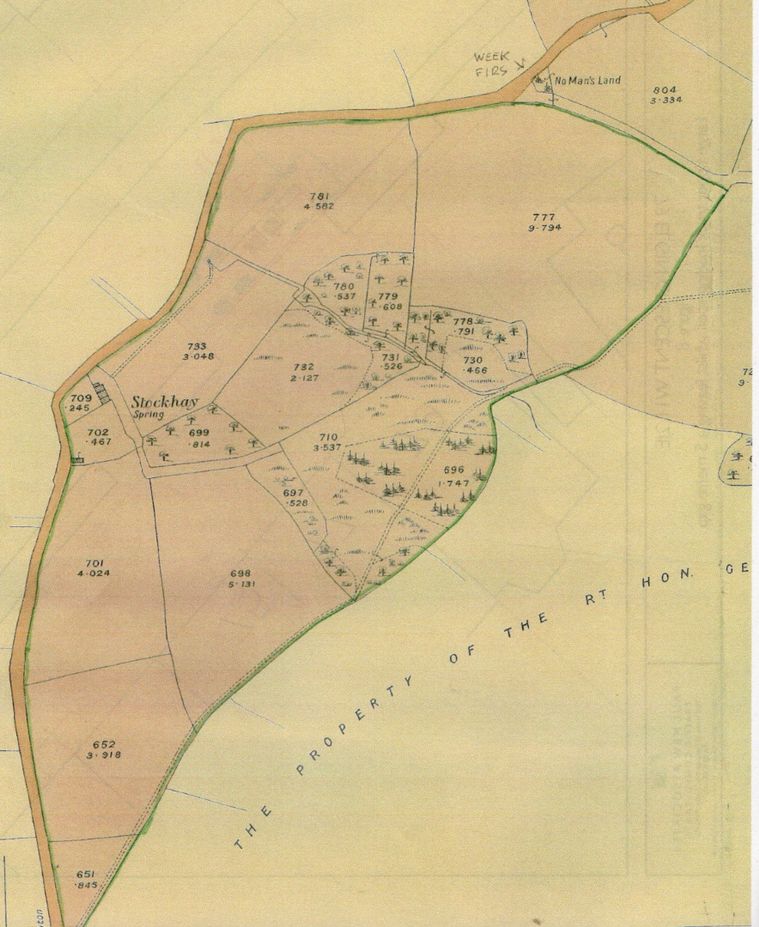 Fields belonging to Stockhay in 1842/3

Deeds relating to Stockhay in the archives

Conveyance of 20.12.1757 whereby Richard Hole of North Tawton, Clerk, executor of the last will and testament of the late Mary Risdon of Spreyton, widow, his late aunt, and also devisee of the lands concerned, Mary Risdon having inherited them from her son Nathaniel Risdon, late of Crediton, gent. conveys to William Battishill of Spreyton, gent., for £300 his one fourth share in Spreyton Barton,Middle Falkedon, Stockon, aka Stockey (“now in the possession of Samuel Bull as under-tenant to William Batishill”), Horracombe Mills and Begbeere, all of which are part of the Manor of Spreyton. William Battishill agrees to pay reserved rents in perpetuity to Richard Hole of 11s 6d for Spreyton Barton; 10s. for Great Falkedon; 10s. for Middle Falkedon and Church Woodland; 2s.6d. for Spreyton Mills; 2s. 6d. for Stockey; and 3s. for Begbeer. Witnesses are Humphry Aram and Richard Dadd. Previous deeds mentioned include a lease dated 7 May 1753 of one fourth part of Stockey granted by Mary Risdon to William Battishill for 99 years, determinable on the lives of William Battishill’s’s son and daughters William, Elizabeth and Mary.

Conveyance of 29.9.1800 whereby Juliana Hole of Exeter, widow and devisee for life under the last will and testament of her husband Richard Hole late of the parish of Holy Trinity in Exeter, Clerk,and Robert Hole of Trinity College Cambridge, Clerk, fourth son of Richard and Juliana Hole, and devisee in fee under the will of Richard Hole convey a number of properties in Spreyton, and also the right to a number of reserved rents in the manors of Spreyton, Fursham and Lampford, to JohnLambert Gorwynof Cheriton Bishop, Gentleman. The reserved rents payable by William Battishill include the 2s.6d. for one quarter of Stockey. Lambert Estate Papers in Devon Heritage Centre

Conveyance (lease and release) of 14/15.10.1800 whereby John Lambert Gorwyn of Cheriton Bishop, Gentleman., conveys to George Cann of Falkedon, Gentleman, certain of the properties and rights to reserved rents in the above deed. The reserved rents include the 2d.6s for Stockey. (Lambert Estate Papers, DRO – not yet catalogued). George Cann died in 1804, and bequeathed his property, including the right to the reserved rent out of Stockhay, to his nephew George Lambert Gorwyn, who was the ancestor of the Lamberts of Coffins.

Lambert Estate Papers, to be deposited in the Devon Heritage Centre.