WEEK (or WEEKE) AND WOODHOUSE 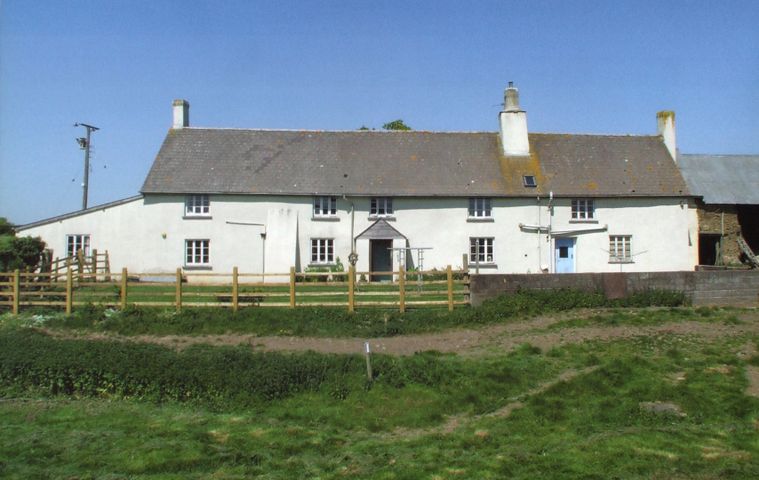 The name, like the variants Wyke and Wick, comes from the old English wic, meaning a farm or dwelling. It is a fairly common farm name in Devon, and often denoted the house of the lord of the manor, so Week may have been an important dwelling in the past. According to the Dictionary of Devon Place-Names, the first mention of the Week in Spreyton was in a legal document of 1327, where it is described as “Northewyk by Spreyton”. Until recently, Week has been the more common spelling.

1600s: Week entered into the possession of the Battishill family of South Tawton probably in 1639 when they purchased a half-share of the Manor of Spreyton, of which Week was a part. They subsequently acquired the remaining half share of the manor, thus becoming the largest landowners in Spreyton.

1600s and 1700s: Barton was the main residence of the Battishills, and they seem normally rented out Week. In 1667, Hugh Peynde seems to have been the tenant, as he is recorded as paying the church rate for the property. Henry Shilstone was the tenant in 1780. But it seems that at the end of the 18th century the Battishills took Week in hand themselves. There is for instance a monument in Spreyton church to “William Battishill of Barton and Week” (1745-1806), which probably indicated that he had lived at both of them at some point.

1800s: William Battishill of Barton and Week had two sons, William and John. He appears to have divided his property between them. William, the elder, got Barton, Spreytonwood and Falkedon; John got Week, Stockey and South Begbeer.John lived at Week until his death aged 88 in 1858, farming some 320 acres, of which Week was 120 acres. He farmed Week together with his adjoining properties of Woodhouse, Stockey and South Begbeer, running the whole property as a single farm.

John was a bachelor, but he was by no means living alone in the large farmhouse at Week. The 1841 census records that John, by then aged 70, was at that time sharing the house with two female servants and six young “agricultural labourers” aged between 11 and 19, probably apprentices (it was normal for apprentices to live with the farmer and his family). In the 1851 census he describes himself as farming 500 acres and employing eight labourers, so he must have also taken on one of the neighbouring farms. He was therefore running a large operation well into old age.

1858: After John’s death, His property went back to his brother’s family in the person of his nephew William Harrington Battishill of Barton.Week was let out to a farmer called John Tucker, who according to the census was there at least from 1861 to 1881. He is described as a farmer of 325 acres, so presumably he was also farming the rest of John Battishill’s estate. In 1861, the farmhouse at Week housed Tucker; his wife and seven children; his widowed father (a “retired farmer”); a house servant; two adult carters; and three teenage “farm servants”.

1884-1911: The records indicate that John Tucker died in 1884. It seems that his son, also John, took over the lease. But John the younger was already farming at Livaton in South Tawton and he seems to have sublet Week. In 1891 the tenant was Samuel Webber aged 27; and in 1901 Robert Baker aged 63.In 1911 the 48-year old John Lott, described as a “farm hind” (i.e. bailiff) was living at Week. The farm was still technically let to John Tucker, so possibly John Lott was supervising the Tucker farming operations. The Lott family were to stay at Week for the next hundred years, first as tenants and then as owners.

1913: William Harrington Battishill of Barton was the last of the Spreyton Battishills. In 1913, after his death, the whole of his 904-acre estate was put up for auction. Week is described as let to Mr John Tucker at a rent of £140 per annum, with a total acreage of 326 (this included not only Woodhouse but fields belonging to South Begbeer and Stockhay).

1929: George Lambert M.P. (later 1st Viscount Lambert) of Coffins in Spreyton, who was by then the other main landowner in the parish, purchased both Week and Woodhouse (on which see below) together with Stockey. The story in his family is that he bought the property for sentimental reasons, as his wife or mother so enjoyed the view of the Week firs – the group of fir trees at the beginning of the drive to Week – from the garden at Coffins.

1950s: George Lambert sold Week and Woodhouse to Lott family, the sitting tenants. However, he hung onto a small copse on the road from Spreyton to Bow, Dockhill Copse, for the sake of its timber.

2011-12: By this time Week was one of the few remaining working dairy farms in Spreyton. In 2011, however, the dairy herd was sold and Week and its land put on the market. The property was sold in 2012 in lots and now only 54 acres go with the house.

Week Farmhouse is a particularly large cob and stone house that was originally thatched, parts of which date back to the 16th century. In the 1913 sale prospectus it was described as cob and thatched, with six bedrooms, two large sitting rooms, store, cellar, dairy, large kitchen and offices, front and back stairs. The farm buildings consisted of:

The farmhouse has been given a Grade II listing; the description is as follows:

Plan and development: originally a 3-room-and-through-passage plan house, extended to 4 rooms in the 18th century, facing south. At the left (west) end is a parlour with a gable-end stack. This is the fourth room added on the end of the small inner room parlour. Hall has an axial stack backing onto the former passage and at the right (east) end is a service end kitchen with a projecting gable-end stack. In the 19th century the kitchen was refurbished and the lower passage screen was removed. At the same time a passage was inserted through the upper end of the hall to new stair turret projecting to rear. The original house was an open hall house heated by an open hearth fire. The hall fireplace was probably inserted in the late 16th century and the house progressively floored over in the late 16th and 17th century. Nevertheless the present house is mostly the result of major early 18th and mid-late 19th century refurbishments. It is 2 storeys.

Interior: the kitchen appears to be a complete 19th century rebuild with crossbeams and brick-lined fireplace of that date. The hall fireplace is blocked although its large size is evident and the fireplace and its oak lintel are intact according to the owner. The crossbeam is soffit-chamfered with runout stops. The rear wall contains an attractive 18th century cupboard with curving back, shaped shelves and a fielded nowy-headed door. At the upper end of the hall (now beyond the 19th century passage) is a 16th century oak plank-and-muntin screen and this was moved a short distance into the inner room circa 1980. No carpentry detail is exposed in the former dairy or parlour and the parlour fireplace is blocked by a 20th century grate. 19th century stick baluster main stair. Most of the roof is early 18th century and carried on A-frame trusses with pegged lap-jointed collars. The roof over the hall however is earlier and includes an early 16th century face-pegged jointed cruck truss which is smoke-blackened from the open hearth fire.

Woodhouse was itself originally a farm about the same size as Week. In 1842 it had 120 acres. The earliest mention of it in the records in a deed of 1523/24 where it is recorded as being one of the numerous pieces of land in mid-Devon owned by William Wyvell (of a Crediton family that briefly flourished in the 16th and 17th centuries). It seems likely, therefore, that Woodhouse – or part of it – was detached from the manor at an early stage, no doubt because it was on the borders of Bow. The next references are in the records of the Spreyton Overseers of the Poor, in 1766 and 1791 when John Fletcher took apprentices to work at Woodhouse, the first being Thomas Manning for husbandry (farmwork) and the second Anne Gidley for housewifery.An 1800 list of Spreyton manorial rents lists an annual rent of 3s 6d. due to the lord of the manor out of Woodhouse and records John Fletcher as the owner. By 1821, however, John Battishill of Week was taking an apprentice for Woodhouse, so it had presumably by then been acquired by the Battishills.

Under John Battishill, the land at Woodhouse was assimilated into Week farm and the old farmhouse at Woodhouse was used to house farm labourers. At some point before 1913, the farmhouse was rebuilt, as the 1913 sale prospectus describes the house at Woodhouse as “a modern stone-built cottage, slated, having three bedrooms, two kitchens and scullery”. Farm buildings were still standing at the time of the 1913 sale, presumably used by the farmer at Week to house some of his animals and equipment. The sale prospectus describes them as:

In 1943 a German landmine exploded near Woodhouse.

In 1928, Woodhouse purchased by George Lambert of Coffins along with Week, and the two properties were subsequently sold on to the Lott family. The latter then sold the house at Woodhouse, keeping the land.

Woodhouse is reached by a drive off the Spreyton-Bow Road, as well as via a path from Week. However, the 1809 1” to the mile Ordnance Survey of Devon, not always very accurate, suggests that it was then accessed via a path off the Spreyton to Spreytonwood Water road.

CENSUS RETURNS FOR WEEK AND WOODHOUSE

Woodhouse: Aaron Sampson, agricultural labourer and his family; plus a female pauper.

Woodhouse: listed as two dwellings, one unoccupied and the other occupied by a farm labourer (John Knapman) and his family.

Woodhouse: one agricultural labourer and his family,

Week: John Lott, age 48, farm hind, with his wife, two sons (one a farm labourer, the other a horseman on farm), and two daughters.

These details are taken from the 1913 sale prospectus for Week and Woodhouse, which lumps together the fields from Week, Woodhouse, Stockey and South Begbeer. These are the ones that belonged to Week at the time of the 1842 tithe apportionment, when the various farms or holdings were still being treated as separate units, albeit in single ownership.

FIELDS AT WOODHOUSE in 1913

These are the fields that belonged to Woodhouse at the time of the 1842 tithe apportionment. They subsequently became part of Week farm.

This group of fields adjoining Week (mostly on the other side of the Bow road) were originally part of a much larger estate called Begbeer, which had been split up many years before. The South Begbeer fields were acquired by the Battishills probably in the 17th century. They were farmed together with Week and were eventually assimilated into it.

DOCUMENTS IN THE ARCHIVES RELATING TO WEEK AND WOODHOUSE

Letter of 16.7.1929 from Dunn and Baker to George Lambertsending him the deeds relatng to Woodhouse (not preserved) plus a schedule listing them (mortgage from WJ Battishill to Frederick Pitts dated 24.12.1907; the transfer of the mortgage on 2.2.1910to THE Rev J.L. Francis and another; another transfer of 21.5.1914 to Mssrs J.W.W. Mathew and H. Ford; and a receipt of 15.5.1928 endorsed on the last-mentioned from Mathew and Ford in favour of George Lambert.