The present church building (in particular the walls and windows) have been the subject of restoration work over the years but it is unlikely that any major part of the building was erected significantly earlier than 1451. However the two fonts, the piscina and the altar stone appear to be of earlier date and are thought to have been part of an earlier church on the site. The piscina and the altar stone (which is considered to bear evidence of early consecration for Christian use) in fact came to light in the first half of the twentieth century when they were found embedded in the masonry when parts of the south wall and porch were rebuilt. In the churchyard on the north side near the tower there is what is thought to be another relic of a church prior to the present building – a circular basin of a font long discarded. It is pierced with a drain hole and shows marks where the hinge of the cover was set into the stone.

The following description is taken largely from the English Heritage description of the church.

The 75-foot tower and north aisle are built of massive blocks of coursed granite ashlar, the nave and chancel apparently much rebuilt in the 19thcentury, with local stone rubble with granite ashlar quoins; granite ashlar detail. The roof is slate.

The tall landmark west tower has three stages with set back buttresses and embattled parapet with corner pinnacles. It has 2-light belfry windows and on the west side a round-headed doorway with moulded surround and a window above missing its two mullions and tracery. The south side of the nave has a small gabled porch (erected in 1852) with a plain outer arch towards the left end, and to the right a single square-headed 4-light window with round-headed lights, sunken spandrels and hood-mould; the latter is a 19th century replacement. The chancel has two original similar 2-light windows with cusped heads and there is a much restored 3-light window in the east end. There is a priest’s doorway in the south side with a tiny two-centred arch. The north aisle has three similar much-restored windows and another with a pointed head and perpendicular tracery at the east end. It has corner diagonal buttresses and the break between aisle and chapel is marked by a semi-hexagonal rood stair turret. A straight join suggests that the chapel is an early addition.

The interior comprises nave, north aisle and chancel; the nave and aisle being separated by four bays with granite columns, of the usual 15th century type, having plain bell capitals. The last bay eastwards is narrower than the rest, having been built to accommodate the screen. A fifth bay in the chancel is rather wider than the others. The tower arch is lofty, and the large plain west window makes the church very bright.

The south doorway is probably 19th century. It is a chamfered segmental-headed arch but contains an ancient, probably mediaeval, studded plank door with original ferramenta and oak lock housing.

The best feature of the church is the roofs. All are 15th century. The nave has a ceiled wagon roof with moulded purlins and ribs, carved oak bosses and a moulded wall plate enriched with 4-leaf motifs.The aisle has a similar ceiled wagon roof except that here the wall plates are carved with fruiting vines. The chancel wagon roof is now open. Here the ribs and purlins are hollow-chamfered enriched with 4-leaf motifs and the large oak bosses are naively but charmingly carved and feature the tinners’ hares, the green man and sacred monograms. The wall plate is similarly carved with foliage and vines. However the remarkable feature here is the Latin quotations carved on the ribs and purlins. It records the names of Henry Le Maygne, vicar, "a native of Normandy who caused me to be built AD 1451" and "wrote this with own hand" and Robert of Rouen of Becedden, Prior of Cowick, near Exeter, and Richard Talbot, Lord of Spreyton, who "gave their goods to my building". Click here to read the full inscription. 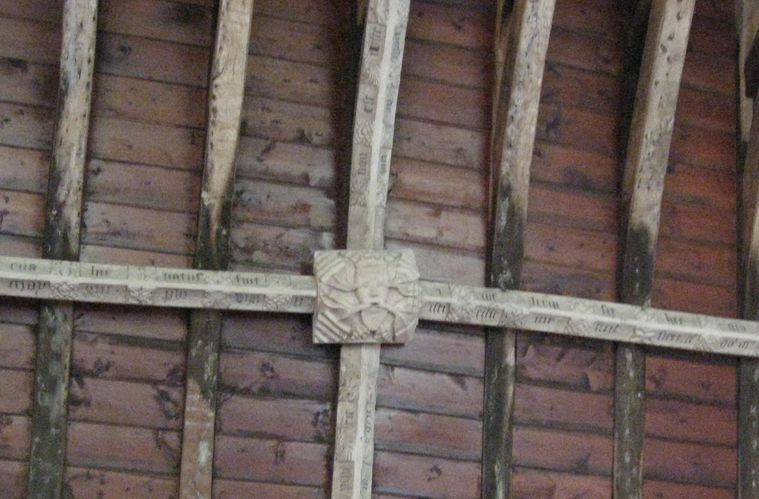 Part of the chancel roof, showing the Green man and the inscription on the ribs.

The Tinners’ Rabbits This interesting design of three rabbits or hares in a wheel sharing ears always fascinates and its significance is far from clear. Like the green man, the designs may be pre-Christian in origin and may have symbolised fertility. The three-rabbit design was at some stage linked to the idea of the Trinity and has been known as “The tinners’ rabbits because the symbol is thought to be associated with the tin-mining industry. However, though there are examples of this design near tin-mining areas at Chagford and Tavistock, there are other examples far removed from tin-mining areas, for instance Newton St Cyres.

There is a tall plain tower arch. Apart from the change in roof levels there is no internal break between nave and chancel. The rood stair in the north aisle is intact and has plain-granite doorways. Between nave and north aisle there is 5-bay arcade of monolithic granite piers moulded with plain capitals to the arcade only. The 4th arch (from nave to chancel) is much narrower than the rest and its arch is lop-sided. The 5th arch is wider and lower than the rest. Either it was built like this to accommodate the lower chancel roof or it is two phases.

The walls are plastered and the nave and chancel include some 18th or early 19th century fielded-panel wainscotting. Many of the window embrasures have oak lintels.

The floor is made up mostly of stone flags. The earliest are small and square; they are the same size as encaustic tiles and some probably 15th or 16th century tiles are included amongst them. The floor also includes some grave-slabs; most are 17th and 18th century, but a couple in the north aisle maybe medieval. There is a 15th century or earlier piscina (for the priest to wash his hands)in the sanctuary.

The altar comprises an enormous slab of granite ashlar of indeterminate date resting on a 20th century oak table. The altar rail, stalls and low chancel screen which incorporates the pulpit are built of oak in Gothic style (the latter was installed in 1728, according to the churchwardens’ accounts). There is a plain pine lectern and oak prayer desk.

The benches are oak in 16th century style with carved wreathed foliage around the bench ends. There is a Gothic style tower screen. All this furniture is late 19th or early 20th century. The remains of a richly carved oak doorway from the former rood screen with delicate Perpendicular tracery is preserved at the back of the church.

John Stabb, in his book Some Devon Churches, has a lot to say about the font. “The top of the bowl is ornamented with a design of circles on each of the faces; each face slopes inwards until the base of the bowl is of nearly the same size as the shaft. The faces of the shaft are ornamented with carvings. It is the exception to find carvings on the shafts in Devonshire. These are of a particularly rude style of workmanship, looking more like a child's first attempt at drawing than anything else. Only seven sides of the shaft are carved, the eighth is against a pillar and left plain. It is almost impossible to say what these carvings are intended to represent; beginning at the left-hand back, there is (1st) what looks like a branching candlestick; (2nd) a figure with the arms akimbo, and a shield or masonic apron hanging in front; (3rd) a female figure with the arms akimbo, and a crown on the head [probably Our Lady crowned]; (4th) half a figure with the arms akimbo, on top of what may be intended to represent a wheel, or the sun [probably the Wheel of Life although it could also be St Catherine of Alexandria whose symbol is a broken wheel]; (5th) a cross with a head above - possibly this is intended for St. Andrew; (6th) a female figure with the arms akimbo; (7th) a male figure with the arms akimbo and the legs stretched out as if in the act of walking. The curious position of the arms is the same in each figure. Granite is a difficult medium to work, and possibly there may have been no fine detail in the carving, but if there was, it has all disappeared. It is said this font is of Saxon date, but the rudeness of the carving is no proof of this; there are Saxon fonts with much finer carving, and the shape of the font is rather against its Saxon origin.”

Some experts, however, claim that the font is in fact 15th century but so rudely cut that it appears archaic 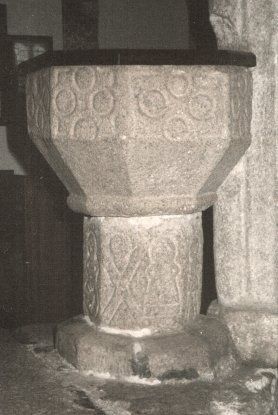 There is an apparently earlier crudely-finished circular font bowl in the north aisle.

The painted royal aims of George III are on a board in the north aisle and there is a painted charity board dated 1825 over the south doorway.

From the account of Spreyton given by Richard Symons in 1644 we learn that the windows in the chancel originally featured the arms of Eton College (briefly a Patron of the Living of Spreyton in the 15th century), and the Talbots (the then Lords of the Manor of Spreyton):

“East window chancel old, vaire on a chief ar three mullets gules pierced of the second.Sable three lillies argent, on a chief per pale azure and gules in the dexter a fleur de lys, in the sinister a lion passant, both ar.(Eton college) sable a crozier and mace in saltine argent, on a chief of the last three mullets sable. This old, south window of chancel, argent a chevron between 3 talbots sable (talbot) impaling, ar on a bend argent (?) 3 tarteaux.”