The granite-built tower houses a peal of 6 bells, the oldest dating back to 1650 and the heaviest (tenor) weighing 12 3/4 cwt. It was formerly a peal of 5 bells until 1927 when a 6th bell, the treble, was added. A tablet in the belfry reproduces the inscriptions on the bells. It was erected in 1927 to commemorate the addition of the treble bell. 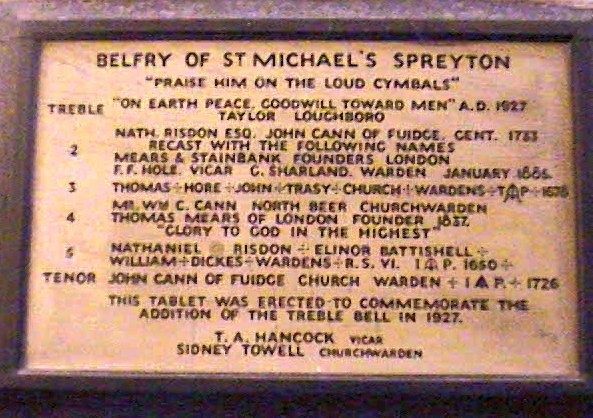 These bells replaced earlier ones. In 1553 the church goods commissioner found at Spreyton: "iiii belles yn the tower their".

On 20 November 1927, to celebrate the arrival of the new treble bell, a peal of Grandsire Doubles of 5040 changes lasting 2hours 55 minutes was rung by a team, none of them local. On a couple of occasions since then peals of that length have been rung by visiting teams.

In 1977, to celebrate 50 years of that occasion, six locals rang call changes continuously for 2 hours 5 minutes with an evening meal for all ringers at the Tom Cobley afterwards. 60 years was marked by 3 hours of non-stop ringing, with many ringers taking part by changing over while ringing. It was decided to remember 70 years with an invitation to welcome back all previous ringers and learners when many took part in a full peal of doubles, after which refreshments ended the occasion. 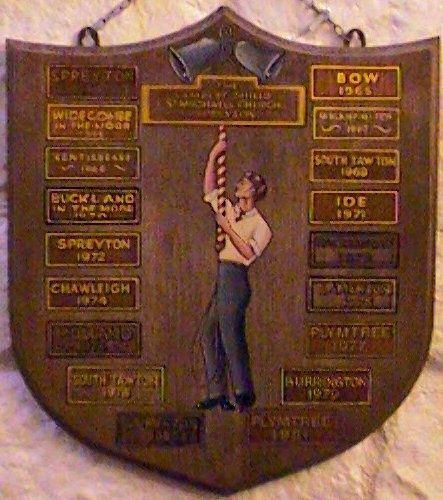 The tradition continues. There is regular service ringing on three Sundays every month, but other commitments make it difficult to ring for the early morning service on the other Sunday. The ringers gather for practice throughout the year every Tuesday evening. These occasions have taught most of the present day ringers and two ladies are now learning and progressing well after just a few months of practise. There are currently 16 ringers, which has been achieved by a tradition of many years of teaching. The current Captain is Mr Ken Vile, telephone 01647 231479.

The ringers were all male until 1959 when ladies became part of the team and still are.

There are many other occasions when the bells are rung including festivals, weddings and funerals (if requested) and by visiting teams, some from outside the County.

For the past 39 years on the third Saturday in June ringers from many parts of Devon take part in a competition for the Viscount Lambert shield, in conjunction with the St Michaels Fayre. The local team were the first winners of the shield and repeated that performance eight years later. Many other shields and certificates have been won by the local team when entering competitions at other towers in the area. The end of year midnight ring is also an annual event, ringing out the old year and welcoming in the new year.

During the winter evenings for many years regular local competitions have been entered. This is an opportunity for mixed peals and for the learners from both teams to gain experience on different bells.

Over the years many peals of double call changes have been rung, a method much favoured by a previous captain, William Towell, who was very respected for his dedication to ringing and his ability to call changes. In his memory a shield has been provided for an evening competition consisting of a full peal of changes without rising or lowering. In 2002 ten teams competed with the local team being placed first. 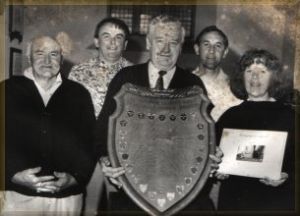 There is another tradition adopted by the ringers and that is that the bells remain silent on the death of a parishioner until the burial. On the social side, the annual Christmas Bingo is the ringers only fund raising event, and this helps with the occasional ringers outing or a ringers dinner for a social get-together. There has always been a warm welcome for visitors to join in or for anyone with thoughts of learning. This method has been successful in the past and if continued would ensure that regular ringing would continue in the future.

The tower may not be entered without permission

The bells may not be rung unsupervised

Persons may not access the steps up to the top of the tower without permission or unaccompanied.

How long does it take to learn to bell ringing? Anything from 6 months to a year. You do not need to be musical but be able to hear if your bell is in the right place so that all the bells have an equal space in between them.

Is there any charge for learning? No, but it is appreciated if learners come on a regular basis and are committed to learning. If, after a few weeks learning you feel it is not for you then the team will quite understand.

Bells when they are not being rung look like this:

This is what Bells when they are ringing look like

Bells when they are put to rest (set up) look like this:

To get a bell ready for ringing it has to be risen up. Ringers can rest for a while by setting their bell up.

When ringing has finished the bells are lowered so they are hanging down again.

When bells are being rung and making a tune bell ringers learn how to make their bell change its place from:

What happens if a rope breaks? This is very rare and the bell ringers are quite safe.

What happens if a bell ringer lets go of the rope? An experienced ringer would not do this but a learner's supervisor would handle the matter.

Is there anything else that can go wrong? Very rarely indeed a bell being put to rest (set up) could break its resting bar (wooden stay which needs extreme care when allowing the bell to rest against it) in which case fellow bell ringers would know how to handle the situation.

Bell ringing is an honour.

Bell ringing is can be tiring

Bell ringing can be dangerous