GRAVESTONES IN THE CHURCHYARD

There are a large number of old gravestones in the churchyard. Some date back to the 1600s and 1700s. Most are of granite or slate with a few in limestone. The graves were numbered and a map of them hangs in the church. Unfortunately, the key with the names has been lost. Today, many of the older headstones are illegible, and many of the graves shown on the plan have simply disappeared. Eleven of the gravestones have been given a Grade II listing by English Heritage/Historic England because of their historical or artistic interest.

Those described below include all the listed ones and a few others of interest.

The Battishills were one of the leading landowning families in Spreyton in the 18th and 19th centuries. They owned a number of farms but mainly lived at Barton, the traditional home of the lord of the manor, and there was a gate from Barton into the churchyard to allow them direct access without coming round by the road.

Approximately 4 metres south of the chancel. Chest tomb dated 1733 in memory of William Battishill.Red brick with grey basalt lid. Rectangular in section with plain sides apart from a central projecting string course and soffit-chamfered cornice it has a plain flat lid. The top is inscribed with Roman serif upper and lower case lettering and records the death of William Battishill in 1733. A secondary slate plaque on the north side is inscribed with similar lettering and records the deaths of another William, nephew of the above, in 1760 and his wife Mary in 1778. 1733 is an unusually early use of brick for this part of Devon. 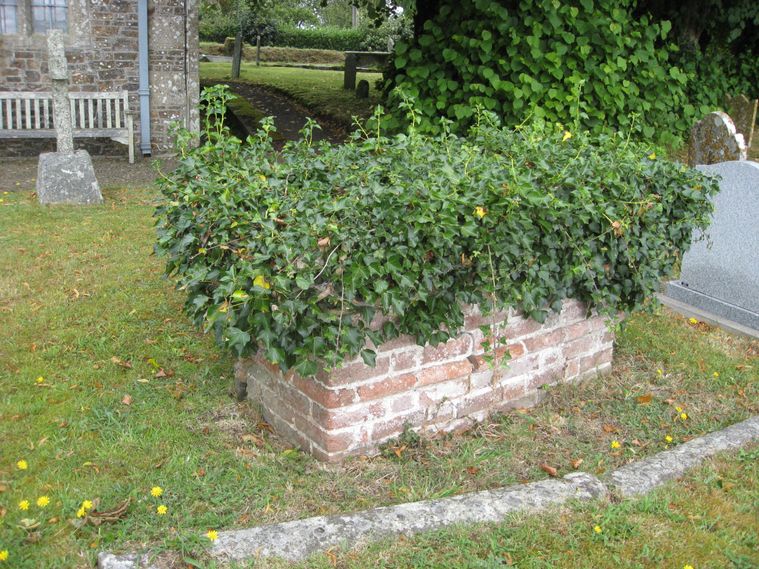 There are also a number of later Battishill graves, including one to William Harrington Battishill, who died 25 November 1881 aged 78 and was the last of the Battishill family to live in Spreyton. Several of his descendants were however brought back to Spreyton from Exeter to be buried. Most of these later Battishill graves are near the porch of the church, against the hedge that separates the churchyard from their home farm of Barton.

The Brocks were for many years farmers at Coombe.There are two graves, one of William Brock and family (below) and one of George Brock, who died Langford, Bow 17 September 1916, but was brought back to Spreyton to be buried. 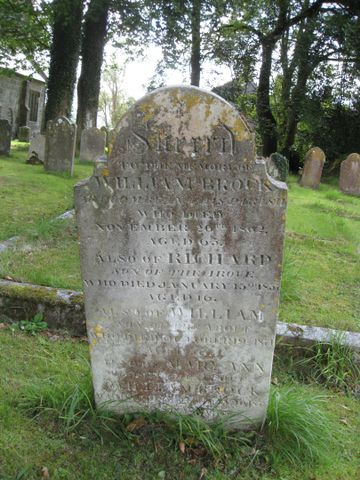 Sacred
To the memory of

of Coombe in this parish

Son of the above

Son of the above,

There are several graves to the Cann family, which consisted of two branches only distantly related (if at all). The senior branch, the Canns of Fuidge, who had been at Spreyton since at least the early 1500s, are mostly commemorated by panels in the church, and many are probably buried under the church – a privilege reserved for the most important parishioners.

Grave of George Cann of Bush

There was, however, a second branch, the Canns of Bush in Spreyton village. The tomb below is that of George Cann of Bush, who died 27 July1832 aged 88 and Susanna his wife who died 8 March 1831 age 76. The inscription on the other side indicates that the tomb also commemorates George’s nephew George Cann, died 30 January 1868 age 77; Elizabeth wife of the latter, died22 January1876 aged 78; andMary Cann, died 29 April 1876 age 84. 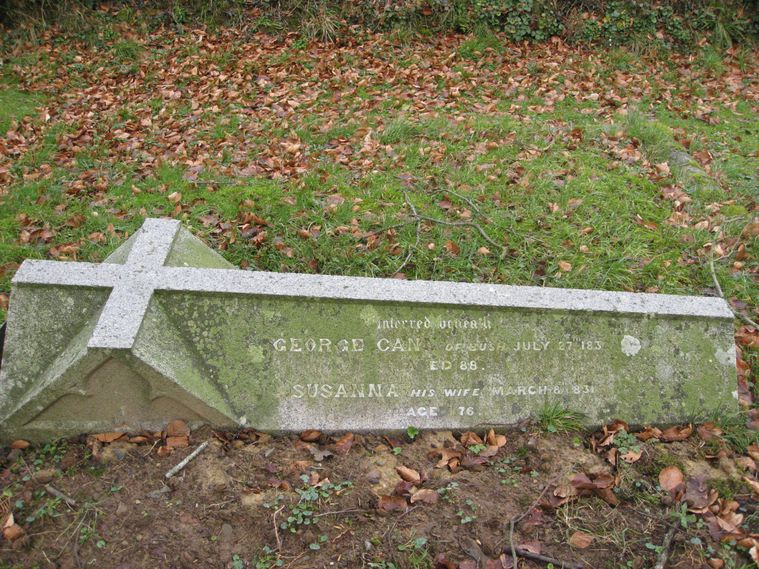 This headstone is to the west of the church. It has lost much of its lettering, but she was probably a child. 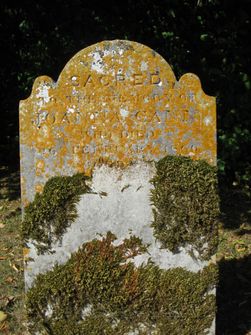 To the memory of

The Tom Cobley who died in 1794 and is supposed by some to be the original of the Tom Cobley in the song was buried at Spreyton, but there is no longer any trace of his grave. There is however another Cobley gravestone commemorating his nephew Thomas who is another candidate for the “old uncle Tom Cobley” of the song.

Approximately 3 metres south of the porch of the Church. Dated 1844 in memory of Thomas Cobley. Limestone. Upright slab standing approximately 1.2m high with shaped head. In the inscription the first word is in Gothic lettering, most of the rest is plain capitals but includes some italics. It records the deaths of Thomas Cobley, gent., in 1844, his wife Elizabeth in 1839 and nephew William in 1837. 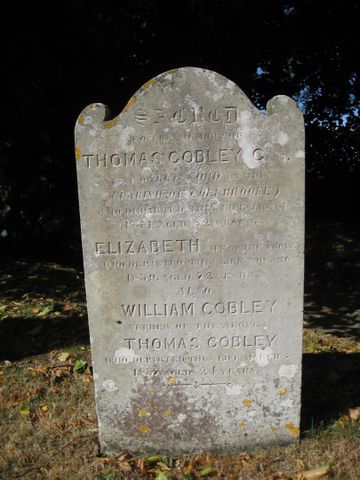 SACRED
To the memory of

the parish of Colebrooke

who departed this life

ELIZABETH, wife of the above

Who departed this life November 26th

Nephew of the above

Who departed this life March 8th

Perhaps the most poignant gravestone in the churchyard is that of the Crotch family. The parish records indicate that John Crotch was the local schoolmaster. 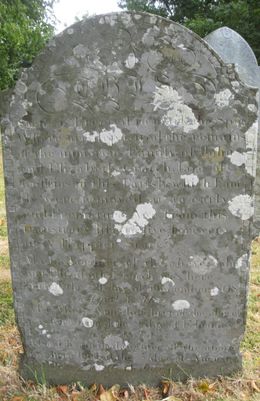 stone is erected to mark the spot

where are deposited the remains

of the numerous family of John and Elizabeth Crotch. Late of

Coffins in this parish: which family

Were removed at an early and premature Age

From this transitory life

To live thereafter in a happier state.

Maria, daughter of the above John and Elizabeth Crotch was here

Also Mary Ann, daughter of the above was here buried the 2nd day of February 1809 aged 18 days

Also Elizabeth, daughter of the above

Approximately 20 metres east-north-east of the aisle. Headstone dated 1771 in memory of Mary Gifford. Slate. Upright slab with shaped head standing approximately 1m high. On the front the top is carved with a winged cherub’s head above an inscription in Roman serif upper and lower case lettering which records the death of Mary Gifford in 1771.

The part of the stone with the first name is illegible and looks to be a name ending in –an. So Historic England may have this wrong.

Here lyeth the Body of

Mary the wife of John Gifford

Of this parish who departed

This Life the 20th day of Janry

The Martins are a very old Spreyton family, who were already in the parish by the early 1500s and there are more than one Martin grave, but only one is listed.

Approximately 5 metres east-south-east of the chancel. Dated 1815 in memory of John Martin. Slate. Upright slab standing approximately 1.4m high with a shaped head. The front has a reeded border and at the top is carved a pair of angels holding an orb on which is carved a short quotation. Below that the first word of the inscription is in Gothic lettering followed by Roman serif upper and lower case lettering and includes some italics. It records the death of John Martin in 1815 and his wife Elizabeth in 1805. The headstone is signed W. Carwithen of South Tawton. 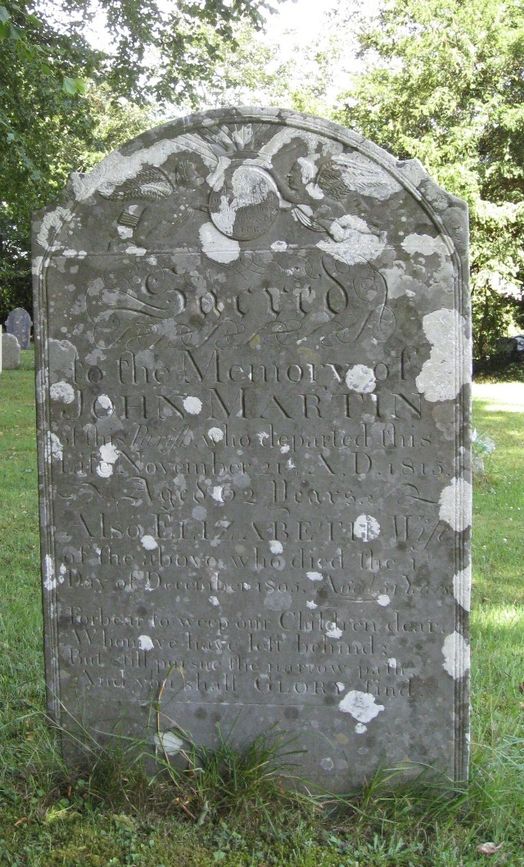 Sacred to the memory of JOHN MARTIN

of this parish who departed this

of the above, who died the 1st

Forbear to weep, our Children dear,

Whom we have left behind,

But still pursue the narrow path

And you shall GLORY find.

The Norrish family purchased Fuidge in the mid-19th century after the Canns, who had lived there for hundreds of years, went bankrupt.

Approximately 10 metres north-east of the aisle of the church. Chest tomb dated 1843 in memory of Mary Norrish. Limestone. Rectangular in plan with moulded plinth and soffit-moulded flat lid each long side is divided into 2 bays by a plain flat pilaster and each corner has a similar clasping pilaster. The left panel on the south side is inscribed with plain capitals and records the death of Mary Norrish of Fuidge in 1843. The other panels are also inscribed with plain capitals and record the deaths of a succession of the family down to 1916. It is surrounded by low granite coping stones with the sockets for cast iron boundary railings. 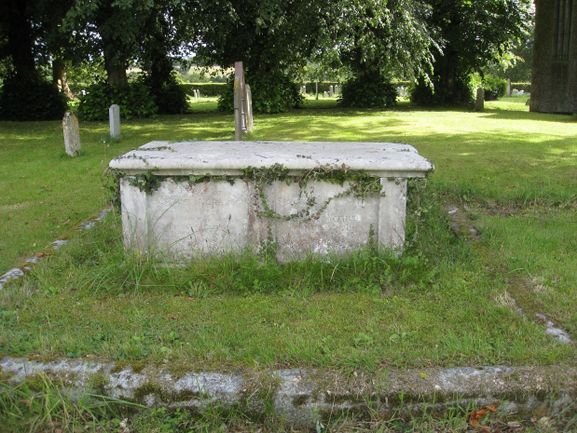 Approximately 2 metres east of the chancel. Headstone dated 1801 in memory of Samuel Rowe. Slate. Upright slab standing approximately 700mm high with shaped head. On the front the top is carved with a charmingly naive representation of a winged cherub’s head flanked by fleur-de-lys (also old-fashioned for its date). The inscription in Roman serif upper and lower case lettering records the death of Samuel Rowe in 1801. 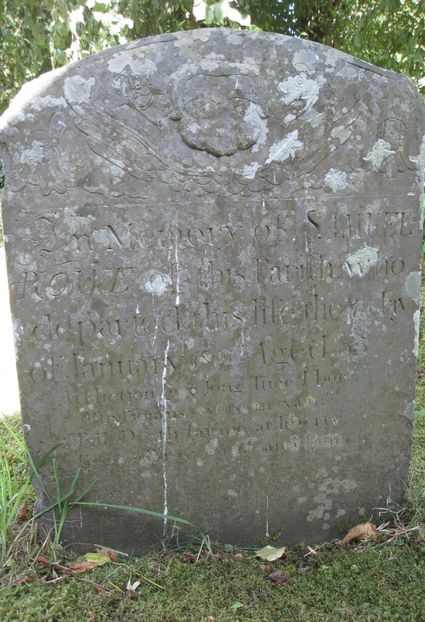 Sacred to the memory of SAMUEL

ROWE of this parish who

Departed this life the 1st day

Affliction some long time I bore,

Physicians were in vain,

Till death set me at Liberty

From all my Grief and Pain.

Mary Tremlett headstone ?1678 (listed). The grave is listed along with the neighbouring illegible one. Historic England wrongly call it the grave of Mary Trew. The inaccurate official description reads:

Approximately 25 metre east of the north aisle. Pair of adjacent headstones. Late 17thor 18th century, one in memory of Mary Trew. Both are granite. Small upright slabs with shaped heads both standing approximately 350mm high. The fronts are inscribed with large crude capitals but only the right one is legible and simply bears the name of Mary Trew; the date of her death must be buried.

In fact there is a lower line of text that almost certainly reads LETT and this is the grave of Mary Tremlett. A number at the top reads 1618 or 1678. 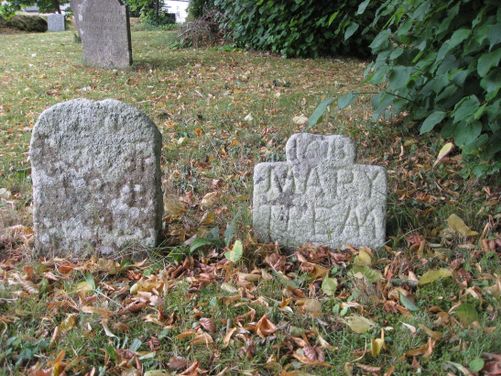 “approximately 20 metres east of the chancel. Two adjacent headstones. 18th century, one dated 1703. Granite. The right one is nowy-headed [with a semi-circular projection at the top of the stone] standing approximately 500mm high but the inscription is illegible. The left one is round-headed and the front is inscribed with upper and lower case lettering. It records the death of William Peerith? who died in 1703”. 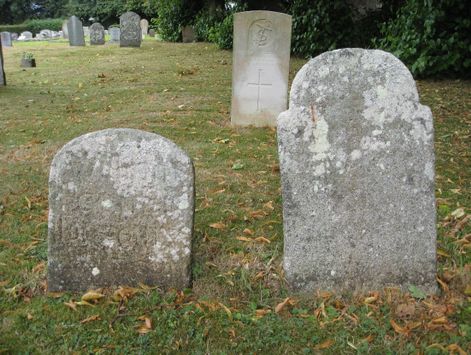 There are also three very ancient headstones next to the church near the porch, which have almost certainly been moved there from elsewhere. They are not easily legible, but the one to the right of the porch may commemorate a John or Joan Battishill who died in 1712. 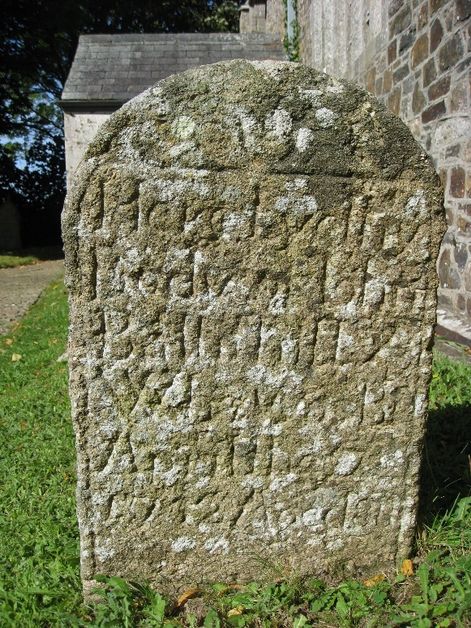 On the other side of the porch there is a grave with a date that may be 1607 on it. 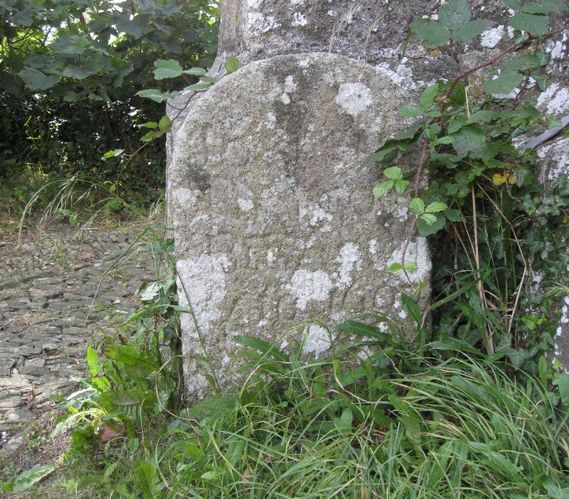 There is also a rather beautiful late 18th or early 19th century slate headstone commemorating Mary Langmead, the wife of James Langmead, and her infant daughter Anne.