At the end of the 1790s, there were fears that the French revolutionary forces, under their new energetic young General Napoleon Bonaparte, would invade England. The British Government responded by encouraging local communities to organise companies of volunteers to act as a sort of Home Guard, ready to fight the French in the case of an invasion.

Not all communities did so. But in Spreyton, fired by patriotic zeal, a local landowner, John Cann of Fuidge, raised a company of volunteers in April 1798 and was appointed its captain. It was officially called the “Spreyton and Drewsteignton Volunteers”, so it undoubtedly took recruits from both villages. But it seems to have been mainly a Spreyton affair, and was normally known as the “Spreyton Volunteers”. The creamware jug in the photograph was probably made to celebrate its creation. It is now in the Okehampton Museum. 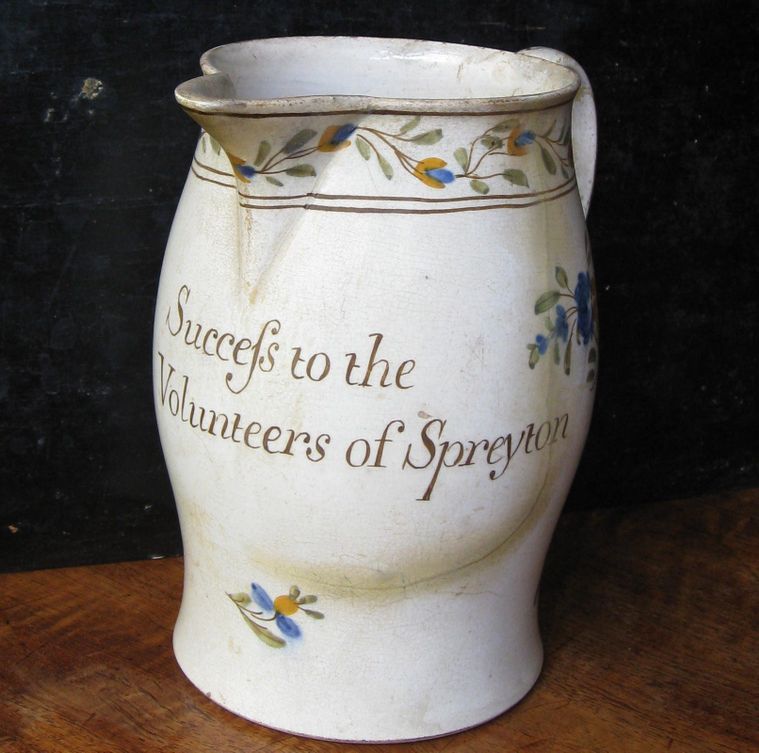 There is a footnote about the Volunteers in the Spreyton Parish Register. The National Archives also contain detailed records, showing the names of the volunteers and how much they were paid month by month. The full strength of the Company was supposed to be a Captain; a Lieutenant; an Ensign; three Sergeants; three Corporals; a Drummer; a Fifer; and 60 Privates. Usually, no more than about 50 Privates were on the pay-roll at any one time during the four years of the company’s existence, but even that is remarkable for two fairly small villages. Most families must have had someone in the Company at one time or another. John Cann was its Captain throughout and William Ponsford (from a Drewsteignton family) its Lieutenant; but the pay records show that there were a number of changes among other ranks, with men being discharged and others joining at fairly frequent intervals.

The company held exercises once a week, and a field was hired (presumably from a local Spreyton farmer) for 2 guineas a year for this purpose. In 1801, perhaps because of heightened fears of an invasion, the Company went over to twice-weekly exercises. On 1 October 1801, Captain Cann even organised a “Review”, obviously a special event, as he put in a special claim to the War Office for the cost of holding the Review, adding at the end that he certified the expenditure “on my honour as an Officer and a Gentleman”. No fewer than 66 Privates turned out for the Review.

Members of the Company were paid for each day of exercise in which they participated. As Captain, John Cann received 9s. 5d. a day; the Lieutenant and Ensign received 2s. 4d; and the rest of the Company were paid 1s. a day (the basic wage of a farm worker at around this time was about 1s.4d a day1). One of the Sergeants was on full-time service and received as many shillings each month as there were days in the month.

The men appear to have been armed with muskets as Captain Cann put in a number of claims to the War Office for the cost of repairing muskets. The Company also claimed a clothing allowance of 1s to purchase “a proper military dress” for all the non-commissioned officers; the latter decided to pay for their own clothing. Captain Cann also put in a number of claims for miscellaneous items like stationery and postage.

In March 1802, the Peace of Amiens was signed with France and the following month the Spreyton Volunteers were disbanded. The danger was not in fact over, as war broke out again a few months later and there was a much more real fear of a Napoleonic invasion. By then, however, Captain Cann’s bellicose leanings seem to have waned as there is no sign of the Volunteers being reassembled.